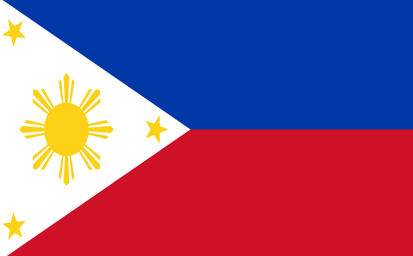 The National Flag of Philippines was officially adopted on June 12, 1898.The National Flag of the Philippines features two equal horizontal bands of blue (top) and red. A white equilateral triangle is based on the hoist side of the flag.flagsworld.org, The centre of the white triangle displays a yellow sun with eight primary rays jutting out from it. Each corner of the triangle also contains a small, yellow, five-pointed star.

The blue colour stands for peace, justice, sacrifice, and truth. The red colour symbolises bravery, courage, and patriotism. The white triangle represents fraternity, liberty, and equality. The large yellow sun symbolises freedom, unity, democracy, and sovereignty. The eight rays protruding from the sun are representative of the provinces of Nueva Ecija, Manila, Pampanga, Bulacan, Cavite, Laguna, Batangas, and Bataan (the first eight provinces that sought independence from Spain). The three five-pointed stars at the corners of the triangle represent the three major geographical divisions of the country: Luzon, Visayas, and Mindanao. The flag has a width-to-length ratio of 1:2.

History Of The Flag Of The Philippines

The Flag of the Philippines has a long and storied history. Its initial design was created by Emilio Aguinaldo (1869-1964) who served as a soldier and politician. In 1897, he was exiled to British Hong Kong where he designed the Philippine flag. This early version of the flag was influenced by the Latin nations of Argentina, Uruguay, and Peru as well as different aspects of the American flag. The original design of the official flag of the Republic of Philippines was adopted on June 12, 1898, when the Spanish rule was overthrown by the United States. However, the first republic of the Philippines was suppressed by the United States and the first flag was banned from 1907-1920.

The new Commonwealth of the Philippines readopted the flag in 1936. Under Japanese rule, the Philippine flag was officially recognized on October 14, 1943. On July 4, 1946, the Philippines gained independence from the United States under the 1898 flag. Interestingly, the shade of blue on the flag has been changed several times throughout its history. During 1985, at the time of Ferdinand Marcos’s reign as President, the authoritarian regime ordered that the dark blue on the flag be changed to a lighter hue to better reflect the earlier versions of the flag. Later, in 1997, during Corazon Aquino’s government that colour change was reversed. On September 16, 1997, the shade of blue was lightened once again in recognition of the centennial of the original Philippine flag. The current version was reaffirmed by the Government on February 12, 1998.

The National Coat of Arms of the Philippines Flag was adopted on July 3, 1946. It is composed of a shield depicting a large sun and three stars. The large yellow sun symbolises freedom, unity, democracy, and sovereignty. The eight rays protruding from the sun are representative of the provinces of Nueva Ecija, Manila, Pampanga, Bulacan, Cavite, Laguna, Batangas, and Bataan (the first eight provinces that sought independence from Spain). The three five-pointed stars represent the three major geographical divisions of the country: Luzon, Visayas, and Mindanao. The American Bald Eagle is placed on the blue field of the shield; the Lion of Castile and Leon is placed on the field of red. The eagle and the Lion represent the colonial history of the Philippines. Beneath the shield, is a white scroll bearing the words: "REPUBLIKA NG PILIPINAS"

The Currency Of Philippines Is The Philippine Peso/Piso

The current official currency of the Philippines is the Philippine peso/piso (₱, PHP). It is made up of 100 subunits called centimos. In 1967 the country adopted the Filipino language on its currency and the term peso was replaced with piso. The word used for the centimos is centavo or sentimo. Printing of banknotes and minting of coinage is done by the Central Bank of Philippines in their Security Plant Complex, in the city of Quezon.

Modern-day coinage was introduced in the country in 1958 and in 1967 the country started using Filipino names on its currency. The commonly used coins are in denominations of 1, 5, and 10 pesos. They also have 1, 5, 10, and 25 centavo coins which are rarely used.

Before the colonial period, the Philippines was made up of various kingdoms. The tribes making up these kingdoms used barter trade amongst themselves and to trade with their neighbours. Due to the inconvenience of this method, the people started adopting some common objects to standardised currency. Gold was one of these objects and it was used in the form of barter rings and Piloncitos which were small gold bits and are the Philippines’ oldest coins. Teston coins were introduced into the Philippines in 1521 following the arrival of the Spaniards, who came with their own money. The Spanish peso was then introduced and many modifications were done to it until the Philippines declared its independence in 1898.

The country started using its peso during this time. These coins were used until 1903 when America colonised the Philippines and imposed a new form of the peso. English was used on currency notes and coins, during the colonial period. This currency was used until 1949 when the Philippines opened its Central Bank. The bank was then issued with the mandate to print and mint the country’s currency – Philippine peso/piso.